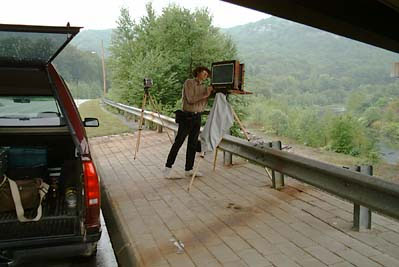 I grew up in Roseland, New Jersey, about twenty miles west of New York City. My father was a machinist, cabinetmaker, and a skilled amateur photographer. My mother was a commercial illustrator. By the time I was nine or ten I was making pictures with my father's Speed Graphic and Rolliecord and developing and printing in his darkroom in our basement. In my third year of college I received a scholarship for a year of study abroad with the International Honors Program. Study centered on anthropology, sociology, and comparative religions, with emphasis on Utopian social movements and communities. I worked throughout the year on a text and photographs study of ritual practices, which was a wonderful chance to be totally immersed in photography and writing for nine months. In 1972 I began writing and photographing freelance articles for Today, the Sunday magazine of the Philadelphia Inquirer. In 1975 I relocated, with the painter Bettina Skor, to rural Connecticut, and centered my professional contacts on the NYC market. Corporate assignments for Litton Industries, IBM, General Electric, Uniroyal added to my editorial assignments for Business Week and others. All along I spent as much time as I could on self-assigned documentary projects centered on rural and small town life. Many of these projects can be found linked from the Online Galleries page on this web site.

In the late 70s I began to work with magazines in the Shelter  field where I'd do about half of my professional work for the next twenty years. I worked with Popular Mechanics, House Beautiful, Mechanix Illustrated (Home Mechanix), Family Handyman, Practical Homeowner, and others. I liked these assignments because of the variety of problem-solving tasks they presented. In a few days work I might need to do large format architectural photographs of building projects, how-to sequences in construction situations, portraits of workers, designers, or homeowners, still life studies of tools or other products—all shot on location under tight publication deadlines. It was a wonderful way to develop a broad range of photographic specialties and much of it could be applied to the corporate/industrial assignments I was also accepting. My personal work returned to large format, first 4x5 and then 8x10. Subjects included the New England rural  and industrial landscapes.

Books and other publications always fascinated me as objects, but the traditional methods of graphic design never appealed. All that changed when the Macintosh computer arrived to replace scissors and paste. Around 1990 I began to design and produce, as well as photograph, commercial publications, mainly for organizations in the healthcare industry. I also began writing again, first for the short-lived publication PhotoPro then for D&CCT  (later changed to PHOTO Techniques magazine), where I became a a Contributing Editor. In 1998 I was co-author and designer/illustrator, of the book, "The New Platinum Print," an instruction manual in modern approaches to the platinum/palladium printing process. I continue to write technical articles from time to time for publication at "The Online Photographer" web site.

Around 2000 I became fascinated with The American Drive-in Theater—not the movies, but the enormous vernacular-architecture structures and the way they relate to the greatly varied American regional landscape. This became my largest project with many road trips to hundreds of surviving or derelict theaters. In tandem with this another large project looks at mostly rural church buildings, more vernacular architecture—I encountered the churches by chance while on the road trips searching out the theaters. In 2012 I ran a successful Kickstarter campaign to help underwrite a Giant Drive-in Theater Road trip, traveling 17,000 miles across and around the country and photographing 107 additional theaters.

I teach workshops at my small facility in Connecticut and several photo workshop centers around the country: see the Workshops page on this site for more information. Two or three times a year I teach Platinum workshops at the Penumbra Foundation in New York.

landscapes done in color with digital capture equipment. Another blog, not currently active, has a large archive dealing with pictures of people involved in public activities ranging from holiday celebrations to gallery openings, to political action.

The picture below is from the Kickstarter project in 2012 and needs to be replaced with something more current. 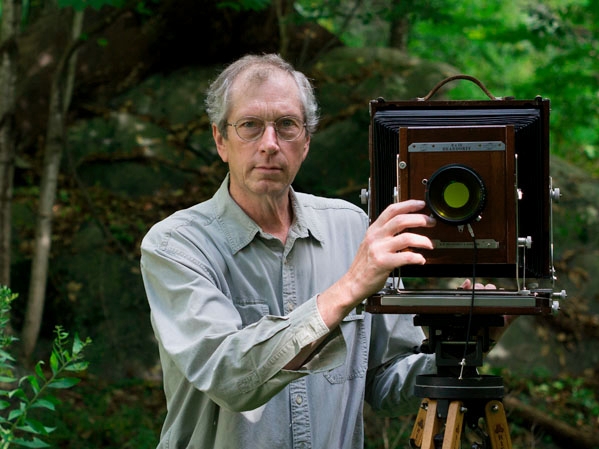