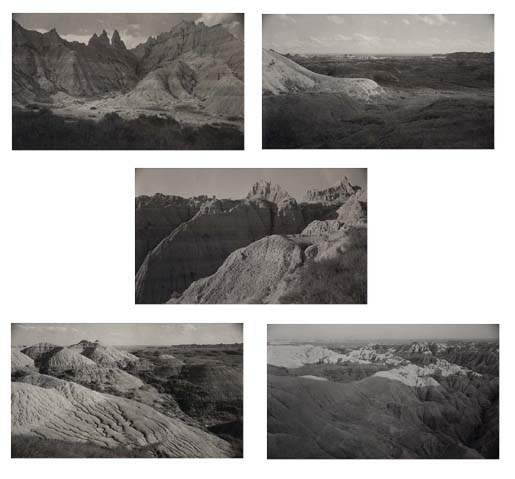 The South Dakota Badlands are overpowering, one of the most amazing places on earth. Despite the drama and harshness of the environment, it is also a terrain of incredible visual delicacy. All the rock colors are so bright that even shadow values are high-key. In glaring western sunlight the values are all bright, subtle, and delicate. These 12x20 inch negatives look their best printed with a short tonal scale on palladium paper, whose color values actually are related to the colors of the land. CW

For those interested in how this wild place came to be, the following notes have been generously provided by Vali Tamm, who has done extensive geological fieldwork in the Badlands.

The Badlands of South Dakota consist of deposits laid down largely in rivers and lakes. The rivers flowed eastward from western Wyoming and Montana, bearing volcanic sediments from the Laramide Orogeny (mountain building event), which began toward the end of the Cretaceous period (approximately 65 million years ago) and continued into the later part of the Paleogene (approximately 25-30 million years ago). The Laramide Orogeny resulted in a regional topographic uplift to the west, and provided an abundance of sediments to adjacent basins. Regional flow of rivers, at the time, was toward the east. As the mountains began to erode, adjacent basins began to fill with the eroded sediments. These basins were deep, and filled with thick sediment strata. After most of the Laramide uplifts had been leveled, during the Oligocene Epoch (23-38 million years ago), sediment continued to move eastward, at a reduced rate. A thin veneer of deposits spread as far east as South Dakota. The Badlands of South Dakota consist of rugged terrain carved from Oligocene deposits. Because of their distance from the Laramide mountains, these strata are thinner than those in the basins closest to the mountains (farther west), were deposited in calmer depositional regimes (rivers flowed slower and sometimes, as flow slowed down, lakes formed), and hosted a variety of fauna. These sediments, varying in color between shades of yellows, grays, green and reds, depending on clay, silt, and organic content, have yielded rich faunas of fossil mammals and plants. The fluted appearance of the sediments today is the result of the differential weathering of these strata by networks of streams. Badlands develop in unconsolidated sediments with little or no vegetative cover, mirroring, to a certain extent, the fingerwork of very fine drainage networks. VT